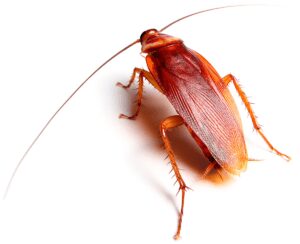 Of all common cockroach species, the American cockroach has the largest body size; molts 6–14 times (mostly 13 times) before metamorphosis; and has the longest lifecycle, up to about 700 days. It has an average length around 4 cm (1.6 in) and is about 7 mm (0.28 in) tall.[7] They are reddish brown and have a yellowish margin on the pronotum, the body region behind the head. Immature cockroaches resemble adults except they are wingless.

American cockroaches generally live in moist areas but can survive in dry areas if they have access to water. They prefer high temperatures around 29 °C (84 °F) and do not tolerate low temperatures. These cockroaches are common in basements, crawl spaces, cracks and crevices of porches, foundations, and walkways adjacent to buildings. In residential areas outside the tropics, these cockroaches live in basements and sewers and may move outdoors into yards during warm weather.

The odorous secretions produced by American cockroaches can alter the flavor of food. Also, if populations of cockroaches are high, a strong concentration of this odorous secretion can be present.[13] Cockroaches can pick up disease-causing bacteria,[16] such as Salmonella, on their legs and later deposit them on foods and cause food poisoning or infection if they walk on the food. – Wikipedia 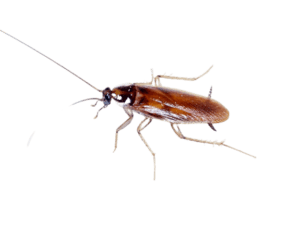 Domestic cockroaches such as the German cockroach and brown-banded cockroach are closely associated with humans and have the potential to adversely affect human health. According to Kramer and Brenner (2009), cockroaches are recognized as one of the most important sources of allergens, with about half of asthmatics allergic to cockroaches. Allergens from cockroaches include cast skins and excrement. Some symptoms of cockroach-induced allergies include sneezing, skin reactions, and eye irritation (Wirtz 1980) – UFL 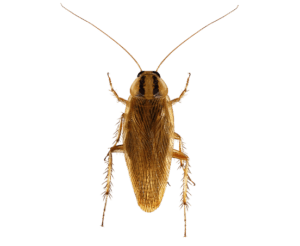 The German cockroach (Blattella germanica), colloquially known as the croton bug, is a species of small cockroach, typically about 1.1 to 1.6 cm (0.43 to 0.63 in)[1][2] long. In color it varies from tan to almost black, and it has two dark, roughly parallel, streaks on the pronotum running anteroposteriorly from behind the head to the base of the wings. Although B. germanica has wings, it can barely fly, although it may glide when disturbed.

The German cockroach occurs widely in human buildings, but is particularly associated with restaurants, food processing facilities, hotels, and institutional establishments such as nursing homes and hospitals.[5] They can survive outside as well, though they are not commonly found in the wild.[6] In cold climates, they occur only near human dwellings, because they cannot survive severe cold. – Wikipedia 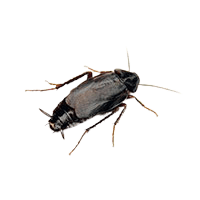 The oriental cockroach is approximately 1 inch long (22 to 27mm) and dark brown to black. Males have wings covering 3/4 of their body, and the female has very short (rudimentary) wings. The inner wing folds like a fan and is membranous. The outer part of the wing is narrow, leathery and thick. The styli between a pair of jointed cerci can identify the male. Both the male and female are flightless.

Blatta orientalis is common outdoors and lives in warm, damp, shady areas near the ground or any area containing natural debris. It will often seek refuge indoors when a drop in temperature occurs, but is still quite tolerable of cooler weather. The most common areas to find Blatta orientalis are basements, crawl spaces, areas between the soil and foundation, underneath sidewalks, in sewer pipes, in floor drains, and under sinks or any other damp, cool area in the house. The roach travels through the structure on plumbing pipes. Outside the house they sometimes aggregate near or under garbage cans. The species tends to be seasonal, with adults appearing in spring and summer. When large numbers of roaches occur, overcrowding can lead to the mass migration of roach species such as the German cockroach, Blattella germanica, the American cockroach, Periplaneta americana, and the oriental cockroach. – UFL 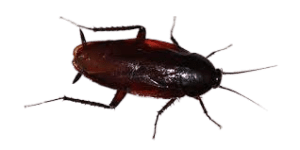 The smoky brown cockroach is aptly named after its color: a dark, glossy brown or uniformly mahogany color that’s consistent on both its back and underside. It looks a lot like the American cockroach, with a similar size and shape. However, the smoky brown roach lacks the yellow accents of the American species.

Indoors, they search for food and water in kitchens and bathrooms. They’ll live and reproduce in poorly-ventilated areas that are warm and humid, like your attic. There, they can become a problem, hiding among cluttered boxes and laying egg cases. As detritivores and scavengers, their diets range from dead insects and dead leaves to starches–like those important documents filed away in the attic. – Cockroach Facts

I Need a Free Pest Inspection