If You Have a Pest or Wildlife Problem in Houston, Call Our Team!

Contact now if you have a pest control or wildlife issue in Houston, Spring, Tomball, The Woodlands, Harris County, or Montgomery County. Call Quality Pest & Wildlife LLC and our pest removal experts are more than happy to lend you a helping hand. Contact begins with a simple phone call! Call (832) 702-9504, describe the pest or rodent issue at hand, and we’ll give you a quote estimate.  Our operators are available 24-hours a day for emergencies.  Have questions? Give us a call.

Get Your Free Inspection Today!

Have a pest or wildlife problem, call our experienced team

He Zhang
I highly recommended this company. They are just PROFESSONAL, timely and reliable to customer. Highly recommend Brad too - trustful.

fatima shah
We heard some noise in the attic & contacted Quality Pest & Wildlife for assistance. They were quick to come out, in fact they came the next day. They helped patch up any openings that wildlife was potentially using to get in. Its been about a week & we are happy that we haven't heard a noise in the attic since. Would highly recommend them.

John Holman
Really awesome experience. They are very knowledgeable and helped us out a ton!

Diane Spreen
The technician did an outstanding job solving my bat issues. He was prompt and professional. He was very knowledgeable and easy to work with. Highly recommend this company for any wildlife issues.

Kelechi
We were seeing bats at night flying around our house and contacted Quality Pest and Wildlife. They came out and not only sealed off the house but sanitized the attic and walls where bats were nesting.

Ryan Ewasko
Technician was prompt and extremely knowledgeable. Resolved my raccoon issues within 24 hours of calling.

venecia sierraalta
Was hearing noises in the attic at night, called a few places and had Quality pest and wildlife come out for a free inspection . Turns out I had a family of raccoons in my attic, Brad trapped/relocated all the raccoons and sealed up all entry points…. 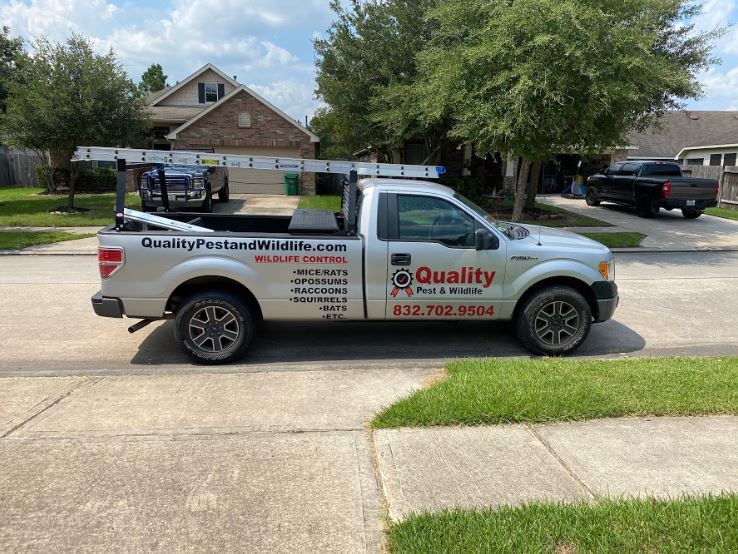 Contact us (832) 702-9504 for 24/7 Services
Experienced and Reliable Quality Wildlife & Pest LLC are experts when it comes to preventing future pest and wildlife re-infestations. We always work to patch up all possible entryways for animals, and always make sure the area is thoroughly cleaned. We are experts at what we do, so you’ll never have to worry about a job not being high-quality! We are Texan natives, so we can work through any weather or situation. We work hard year-round to provide expert pest control & wildlife removal service to you. We understand the stress that infestations can cause, and are proud to take that weight off of your shoulders! So don’t hesitate, give us a call today! We service Houston, The Woodlands, Tomball and Spring.