Drywood termites are a termite species known for thriving in hard, dry wood found inside a home.  This includes structural timbers as well as furniture, picture frames and banisters. They do not make colonies under the soil – instead, they make their way into the wood and are able to extract necessary water from the wood they ingest.

This pest can cause just as much damage as other termite species, and if you suspect an infestation, you should seek drywood termite treatment before too much damage has been done.

The size of drywood termites range, depending on their age, from 1/4 inch to 1 inch long. Adult drywood termites have a thicker, oval-shaped waist, short legs and straight antennae with equal length wings. They are usually cream-white to light brown in color and have six legs. – Pestworld 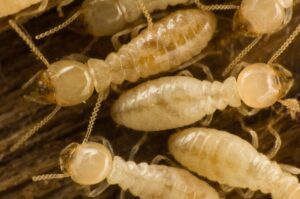 Subterranean termites are the most destructive insect pests of wood in the United States. They cause billions of dollars in damage each year and have a negative impact on a family’s most valuable possession— the home. Problems occur when termites attack the wooden elements of homes, businesses and warehouses built by humans. Subterranean termites are social insects that live in colonies within the soil, hence their name “subterranean.” These colonies contain three forms or castes: reproductives, workers (pseudergates) and soldiers.

After 2 to 4 years a subterranean termite colony is mature and produces “swarmers” (winged primary reproductives). Termite swarmers leave the colony in large numbers during the spring and early summer. Swarming begins in South Texas in January and February; in the Panhandle region of Texas, swarms do not occur until April and May. Environmental factors such as heat, light and moisture trigger the emergence of swarmers, with each species having its own set of requirements.

Dead trees and brush provide a natural food source for foraging subterranean termites. When natural vegetation is cleared and houses are built, termites often switch to feeding on wooden structures. Termites enter buildings through wood that is in direct contact with the soil and by building shelter tubes over or through cracks in foundations. Any cellulose material in direct contact with the soil, such as trees, vines or plumbing fixtures, can serve as an avenue of infestation. –Agrilife