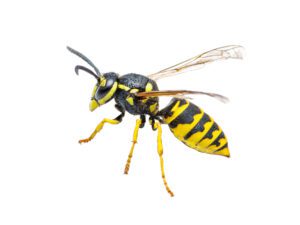 Vespula squamosa, the southern yellowjacket, is a social wasp. This species can be identified by its distinctive black and yellow patterning and orange queen V. squamosa is typically about 0.5 inches (1.3 cm) long and distinguishable by its black body and yellow striping pattern over its entire body. This species has clear wings and a hairless body.[5] While the males and workers resemble other yellowjackets, the queen has a unique appearance. She is significantly larger than the males and workers and is more orange in color.[1] In addition, both V. squamosa and the V. sulphurea have two stripes on their scuta, which differentiates them from other species.

As a form of defense of their nests, southern yellowjacket workers use alarm pheromones to communicate with each other to coordinate an attack. These behaviors are chemically mediated, and these alarm pheromones cause many social wasp species to leave the nest and attack whatever may be threatening it. Individuals can emit this pheromone from a few places in their bodies. – Wikipedia 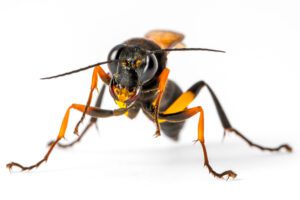 Although their appearance varies, most adult mud daubers are about ½ to 1 inch long (12-25 mm). Mud daubers are usually black, but they may have pale markings or a blue metallic luster. The mud dauber has a “thread-waisted” body, meaning there is a long, slender segment between the thorax and abdomen. Mud daubers also possess clear or dark wings. Mud daubers are not aggressive and are unlikely to sting. Still, care should be taken in the presence of an abandoned mud dauber nest, as other, more aggressive insects may take it over. – Pestworld.org 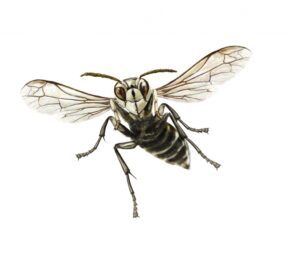 The bald-faced hornet is not a true hornet but is a relative of the yellow jacket and other wasps. It gets its common name from its largely black color and mostly white face, and is commonly referred to as a hornet because of its large size and aggressive nature. Bald-faced hornets greatly resemble their yellowjacket relatives, with black bodies and a predominantly white-patterned face. They also have two slanted lines running from their midsection towards their head and on the latter part of their abdomen.

Avoiding contact with these insects is key to prevent getting stung. Homeowners should seal up any tiny openings like cracks where bald-faced hornets would be able to enter when seeking shelter. Keeping food covered, especially when outdoors, will also help keep these insects at bay. When spending time outside, people should avoid wearing strong fragrances and opt for unscented hygienic products. Likewise, they should wear shoes that cover and protect their feet from rogue hornets. –Pestworld